It’s difficult to make accurate predictions about events these days, but hoping for the best, we are moving the Lehigh Valley Women’s Summit to October 20, 2020. While we respect the wisdom of social distancing, we miss the advantages of getting together with other influential and powerful women. Plans for the 2020 Women’s Summit feature incredible speakers and a variety of networking and educational opportunities. We hope to meet in person in October, but there are options if that’s not possible. Subscribe to our newsletter for full information, and browse our website and social media for updates. In the meantime, thanks for your patience and understanding, and stay well. 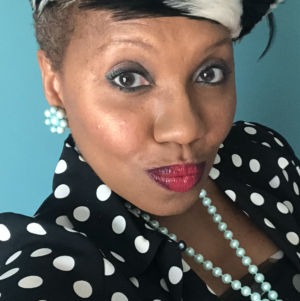 Tracie’s the Costume designer for 2016 Off-Broadway play, “Faith Under Fire Stage play”; just held at East Stroudsburg University in March. In February 2018, she Co-hosted “Black Panther Red Carpet premiere” in Allentown, PA. Costumer at “2017 Black Hollywood Film festival” vignette with actors from “GreenLeaf and The Have and the Have Nots” on the O Network.

Hails from Westchester County, NY before coming to PA. Tracie freelanced in NYC as Wardrobe/Costume Stylist for magazines Black Elegance, BELLE, and THE SOURCE. Costume Designer, for The Professional Performing Arts School’s “Little Shop of Horror”.  Costume Designer for Independent featured film, “Naked Acts” starring Ron Cephas Jones (William) from acclaimed series, “This is Us”. Naked Acts” was recently shown in April 2018 at the CIVIC THEATRE OF ALLENTOWN.
She is quoted as being a “Motivational Speaker” by Bethlehem Press when she spoke to young adolescent girls at Broughal Middle school”. Speaking engagements have included, “Appreciating Diversity workshop for middle school leaders at DeSales University, Fountain Hill Elementary, LAVCL after-school program for girls, Strayer University, Falcon Institute of Health and Science and held a workshop at GSEP conference.

Springers influence extends beyond costuming. Springer was a Finalist for 2017 Nonprofit CFO of the Year. She serves as a member of the 2018 Allentown Human Commission Board and an Associate Producer of “2018 Miss Black America” pageant. Springer served on YWCA of Bethlehem, PA BOD where she Chaired and launched YWCA’s Annual and sustainable program- Prom Dress Day for 6 years.

Has lived in Palmer Township with her husband Reggie and their children Najah and Elijah for 15 years. A member of Delta Sigma Theta Sorority, Inc. and National member of Jack and Jill Inc. She earned her Master of Education from New York Institute of Technology and BS from Mercy College.